Beginning Friday, July 8, 2022, all vehicular traffic entering the Frederick Douglass Greater Rochester International Airport via Brooks Avenue and Airport Road will experience a temporary traffic pattern shift due to the construction of a roundabout on Airport Road (see attached map). Passengers should expect lane reductions upon entering the Airport campus from Brooks Avenue and will traverse a temporary road that will be constructed north of the work zone. The road detour will be posted and detour signs will direct all vehicles through the construction zone.

The Upper Level Departures roadway and the Lower Level Arrivals roadway will remain open for passenger and visitor drop-off and pick-up throughout the duration of construction.

The Hourly Parking Lot (Purple Lot), Long Term Parking Garage (Orange Lot), Weekly Parking Lot (Green Lot) and Airport Shuttle Lot (Yellow Lot) will not be impacted by construction. All parking lots will remain open and accessible to the public. Passengers and visitors are encouraged to follow the signage along the Airport campus to find their desired parking location.

The Smart Phone lot, located southwest corner of Airport Road, will be closed during construction. To accommodate for this closure, the old Smart Phone Lot, located between the Green Lot and Yellow Lot, will reopen for residents picking up passengers from the Airport. Signage will be posted throughout the Airport campus directing people to the temporary Smart Phone Lot.

As always, passengers are encouraged to arrive at the Airport at least 90 minutes prior to their departure times and to follow the detour signage during this period.

The anticipated timeframe for completion of the roundabout is scheduled for 19 weeks once work commences. Detours will be removed on September 30, 2022. 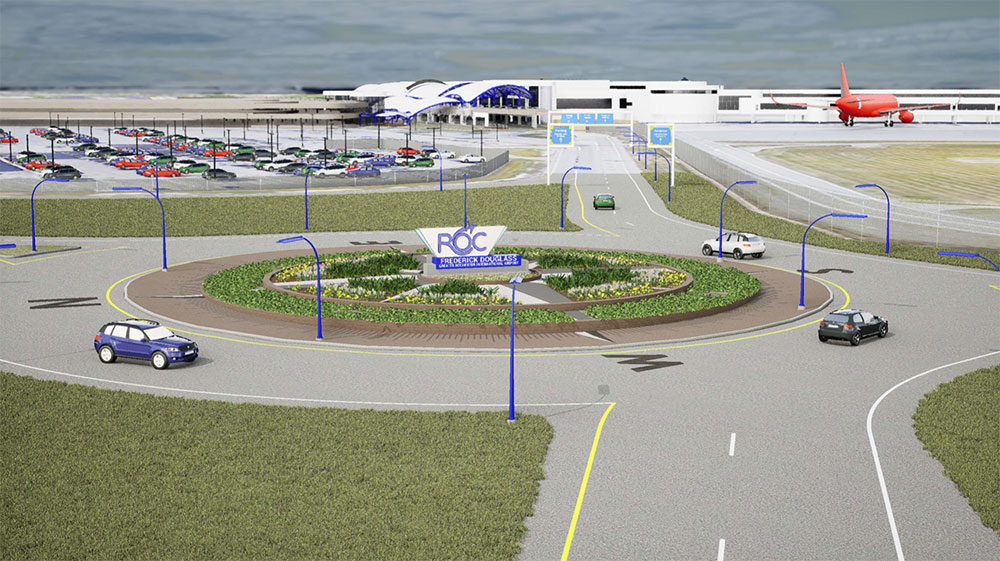 Due to Governor Hochul’s announcement updating COVID regulations from the New York State Department of Health, masks will still be required in all public transportation entities within the State of New York. The order includes the Frederick Douglass Greater Rochester International Airport. We will update if the policy changes.

Individual airlines reserve the right to require masks aboard their planes. Please refer to the requirements of the airline you are flying. Thank you for your understanding and patience as we traverse these changing times.

ROC Airport follows the guidance provided by public health experts at the Monroe County Department of Health and federal Centers for Disease Control and Prevention (CDC) during any public health incident.  In addition, the ROC Airport routinely disinfects and cleans high traffic areas at the airport like handrails, escalators, elevator buttons, restrooms, food court etc. ROC has increased hand sanitizer stations available to passengers throughout the airport and will continue to coordinate with our airport tenants and monitor interagency protocols.
Read more about the #ReadySetROC initiatives in place at ROC for passengers here.

For more information, please visit the Monroe County Coronavirus Information Page, which includes links to resources at the CDC and more.

Passengers are encouraged to contact their airlines directly with questions related to reservations and flight status.
Airline information can be found here.

Your Gateway to the World!

Whether you are a Rochestarian or a visitor, the Frederick Douglass Greater Rochester International Airport (ROC) provides the utmost in air travel services to accommodate your individual needs.

ROC features a modern two-story terminal, enclosed parking garage and a two-level roadway with separate avenues for arrivals and departures. It is a small hub airport which handles approximately 120 flights per day with 19 non-stop destinations, serves approximately 2.4 million passengers annually, and houses the operations of 6 commercial air transportation providers and their affiliates.

ROC provides vital air transportation services to cities in the northeast and to major hubs in the Midwest. In addition, it serves as an important economic component of the air transportation network connecting Western New York to other parts of the nation and the world. The airport is located four miles southwest of the City of Rochester and 12 miles south of Lake Ontario, the smallest of the Great Lakes.

The first development of the Frederick Douglass Greater Rochester International Airport was the construction of hangar No. 1 in 1927. The hangar was built on a plot of ground south of the city on Scottsville Road. The airport was then named Britton Field. It was in 1927 that the first Rochester to New York City passenger flight was made.

In 1928 the name of the aviation field was changed from Britton Field to Rochester Municipal Airport. From 1928 on, additional work was done on the runways, drainage and Hangar No. 2 was erected.

From 1940 thru the war years the airport was the scene of great activity. Scheduled flights increased, civilian pilot training expanded. There was also a cadet flight school which at one time numbered 1,000 students.

The Frederick Douglass Greater Rochester International Airport was taken over by the County of Monroe on the 1st of January, 1948. Monroe County began making major improvements to the airport. These improvements included the construction of a new 5,000 foot long instrument runway, lengthening of the north-south runway from 2,670 feet to 5,000 feet, and construction of the administration building on Brooks Avenue.

Monroe County opened a new million-dollar terminal complex at the Frederick Douglass Greater Rochester Muncipal Airport in 1953.  The red-brick structure was designed to accommodate Rochester’s needs through at least 1980.  In its opening, the new ROC terminal had a single boarding gate for the three airlines serving the city: United Airlines, American Airlines and Mohawk.  Ticket counters, a restaurant/cocktail lounge and gift shop were adjacent to the gates along with an outdoor viewing gallery.  Passengers claimed their luggage off of shelves adjacent to each airlines ticket counter.

Renovation and expansion remained the main issue for ROC through the 1960’s, at one point local officials considered construction of a joint airport with nearby Buffalo and as a result expansion plans were put on hold until the late 1970’s.  In 1978 deregulation resulted in the number of airlines serving ROC to skyrocket.  Renovation expanded both concourses in 1978 adding individual departure lounges and eight jetway bridges providing passengers with covered boarding for the first time ever.

By the early 1980’s conditions at the ROC terminal were beginning show signs that the facility needed yet again another upgrade to accommodate its continued growth.  Stationary baggage shelves were replaced with baggage claim carousels and it became increasingly clear that a more modern terminal was needed. The site of ROC was the best location offering access to local roads.  Officials spent much of the 1980’s designing the new facility.  The plan called for two new concourses, a much larger main terminal building, two floors for baggage on the ground and ticketing on the second story as well as a hotel and parking garage.  After the final design was selected work was underway on the new terminal in 1988.  The facility was built in pieces to allow the old terminal to remain in operation during construction.

The new terminal was officially completed in 1991 and to date no trace of the old terminal remains- except for the historic, refurbished air traffic control tower still on display at the Airport.  In honor of two great Rochesterians, Concourse A was named in honor of Frederick Douglass and Concourse B was named in honor of Susan B. Anthony.  Metal plaques are displayed at the entrance to each concourse displaying their names and commemorating their historic contributions.

Following the events of 9/11 the Airport began to explore options of a Centralized Security Checkpoint at ROC to relieve the long lines many passengers began experiencing with heightened security regulations.  In February of 2005 the terminal went through yet another renovation to better accommodate record passenger growth.  ROC opened a six lane Central Security Checkpoint, a brand new 3,500 square foot Public Viewing, increased vertical circulation through more prominently located escalators and elevators and improved restrooms and flight information screens.  Phase two of this construction project started in 2006 and included improvements to the concourses and additional retail concession renovations.

In 2016, ROC was the first airport in New York State to win Governor Andrew Cuomo's Upstate Airport Economic Development and Revitalization Competition receiving $39.8 million in State Funds to transform and modernaize infrastructure at the Airport for the 21st Century.  The total project was completed in October 2018 and cost $79 million: the remaining project cost was paid for using Passenger Facility Charges (PFC), Airport Authority Funds and Federal Aviation Administration Airport Improvement Funds (AIP).  The recent renovations have created a better passener experience from curbside to cabin at ROC.  Project highlights include: new Smart Phone Lot, Terminal Entrance Canopy, enlarged Passenger Security Checkpoint, Central Passenger Arrivals Greeting area, expanded food court with local food options, new bar and diner, play zones created in partnership with the Strong National Museum of Play, safety and security enhancements, smart LED gate lighting tied into the flight information display system, installation of hearing loop and counter loop technology for hearing impaired passseners, testing and deployment of technology that translates American Sign Language to voice and text at passenger interface locations, AIRA a free app passengers who are visually impaired can use for assistance navigating the terminal and a new passenger network called ROCview that allows passengers to view in REALtime their gate on their own personal moblle devices/tablets allowing passengers to relax in the terminal rather than sit idle in the gate holdrooms as they await their aircraft for departure.